Dardomania is a dart throwing game from Sleic. Main circuit board: 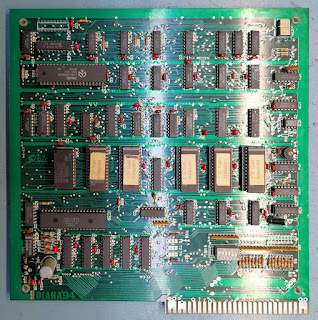 There are a few EPROMs seen with stickers. Unfortunately one of the EPROMs, marked in purple, is behaving erratically. Upon closer inspection: 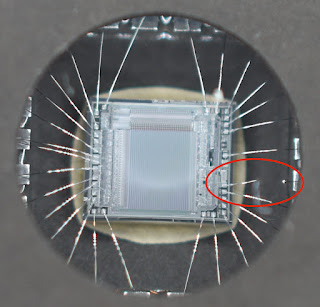 The VCC bond wire is broken. Unfortunately it's not just snapped but rather has balled up. This implies it melted from excessive current and the die itself may be damaged. If this is the case the data may still be there but it would beyond our current capabilities to extract.

So how can we show the chip is still salvageable?

Next we sawed off the top of the EPROM to reveal the bare die: 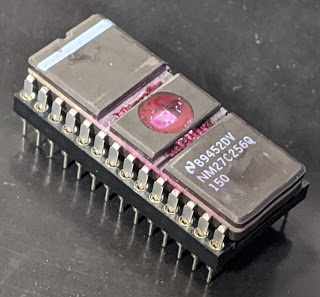 We used a diamond saw to cut the majority of the window away. The chip is soldered into a socket, filled with nail polish to protect the die, and then the center is mechanically sheared off: 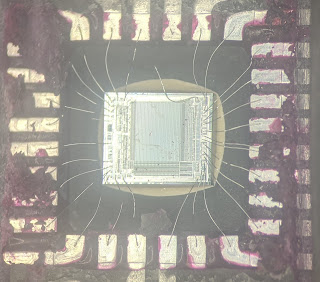 Unfortunately this caused 2 more bond wires to come loose and now three need to be reattached. This is believed to be caused by the new procedure using a socket. The vise didn't grip the package as firmly and led to some slop during shearing. We believe using the socket is the right direction (strengthens pins during and after shearing) but in the future need to grip the package directly even if it's socketed.

Wire bonders are finicky and if you aren't careful you can damage the chip. So we elected to probe the pads instead of attaching new wires.

Anyway, we inspected the die and didn't see anything alarming. For example here is what damaged I/O can look like: 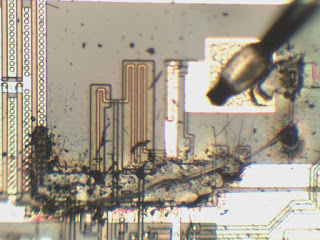 With this out of the way, next step is to power up the chip. We probed VCC and put the EPROM into a high end chip reader that monitors for excessive current. We omitted probing the other two pins as they were just address/data. Somewhat to our surprise the read went normally: no overcurrent and plausible looking data came out!

So next we added a few more probes to get the other pins connected. This process is relatively straightforward as bond pads are relatively large ("macro") vs traditional microprobing. 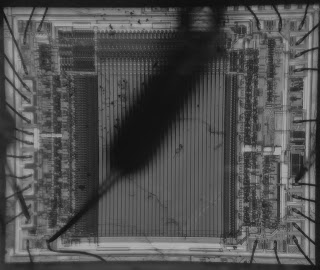 Finally preliminary inspection of the EPROM data vs the others in the set looks reasonable. Testing on real hardware is pending and we'll post a small update once its verified.

In other news we have also started more serious microprobing but a lot more effort is required before we get usable results. We also extracted some PICs: 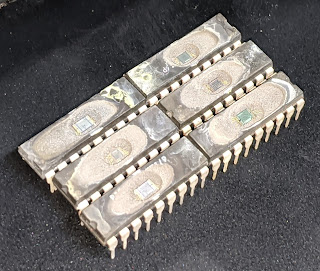 We also tried laser glitching some PIC16F84s but were unsuccessful. We've had success in the past and believe this is a test setup issue. We'll retry in the near future with a different laser.

Enjoy this post? Please support us on Patreon or follow us on Twitter! Note: with the Indiegogo campaign over we unfortunately don't currently have a way to accept one time donations.