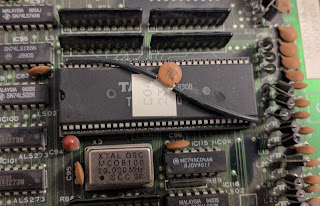 In a previous post we described some early attempts to analyze the Taito C-Chip. See Haze's forum post for some background on the C-Chip itself.

In particular we're interested in the EPROM. Previous efforts focused on less invasive techniques with the goal of keeping the C-Chip alive after dumping. Unfortunately, we've been unable to successfully send an unlock command and efforts to rebond the EPROM die have been difficult with the equipment we have on hand.

With this in mind, we took a break to regroup. If we remove the ASIC we can solder to PCB traces shared with the EPROM. Traces are documented in our wiring diagram:

Which allows us to make an attack (soldering) plan: 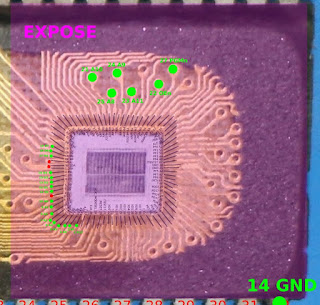 The basic idea is to mill and etch away the purple masked area to expose the PCB. Then, solder wires as indicated by the green dots.

A few issues, but nothing too bad. First, this implies requires removing the ASIC to have enough room to work. As there is not a reliable way to safely remove it (or easily put it back for that matter), this means killing the module. Second, the PCB traces are roughly 6 mil (ie 0.006" => 0.15 mm) width and roughly 12 mil (0.3 mm) pitch. These are non-trivial to solder, although doesn't require as much precision as hand wire bonding (roughly 0.1 mm pads at 0.2 mm pitch). Sort of like soldering a bunch of "0201" size resistors in close proximity.

Mill it to near PCB: 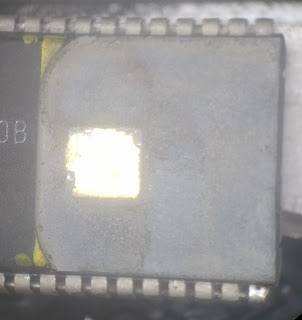 We went about 2.5 mils down at a time until the ASIC paddle just starts to show. You can see bits of shattered die clinging to the paddle corners.

Then use acid to fully expose PCB: 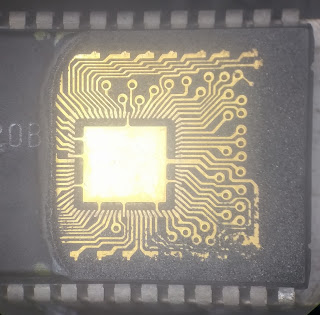 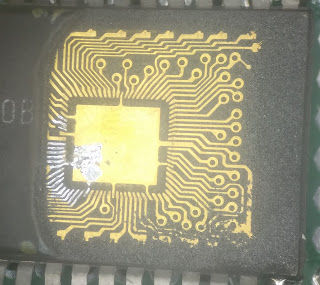 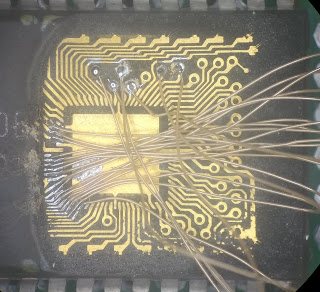 Which successfully dumped the EPROM!

A little hard to measure, but it takes roughly 3 hours per module using this technique. Definitely better at soldering since starting this project. 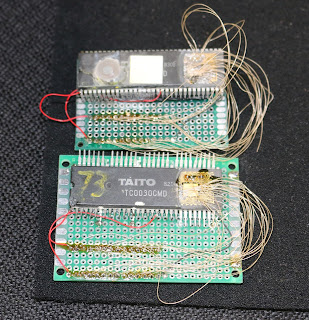 Volfied (top) was our first attempt and has the CPU removed due to some early issues getting a dump. We thought the CPU might have been driving some control lines, but it turned out to actually be some solder debris shorting out the power rails. Surprisingly our programmer didn't generate any error messages (over current, continuity, etc).

We have a few more chips in the pipeline that we expect to finish over the next couple of weeks. We're still figuring out which chips, if any, we still need to source to cover all known games.

We've also continued to think about the best ways to keep the module alive. There are still a few options like decapping the area between the dies and using a laser cutter to isolate the EPROM control lines from the ASIC. This is a littler riskier though as we might accidentally sever a bond wire or corrode EPROM pads. For example, if any solder crept to the bond wire it would dissolve the gold, severing the connection.

Finally, what about keeping the PCBs alive after the C-Chip lobotomy? At this point we're thinking the best option is to design a C-Chip compatible module. We know the CPU, have the firmware, and have a reasonable understanding about how the ASIC works. We suspect with a little fiddling one should be able to figure out the remaining details. That said, we'd like to focus on the extracting data rather than repairing PCBs. So this may be left as an exercise to the reader.