This is a long standing WIP. Although this is not complete, thought we'd give an update as to where this project is and where its going.

EDIT: we forgot to add background information. There's some info by Haze here.

Among the samples received are some TAITO TC0030CMD "C-CHIP" integrated circuits.

Although generally little is known about this, a previous decap revealed its a multi-chip module (MCM). Given these are relatively scarce, we started by analyzing an x-ray someone took:

The package is filled with all kinds of goodies attached to an etched substrate!
This lines up with the previous decap, but also shows the missing bit:

Unfortunately, the above sample is missing the MCU section, which is critical for our analysis. After some discussion we decided we need to decap one ourselves to better understand the surrounding circuitry. Preparing for decap:

This was then filled with a relatively large pool of fuming nitric acid, heated, and rinsed, until the substrate was revealed: 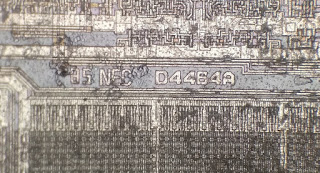 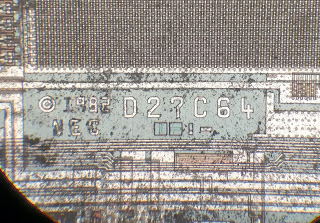 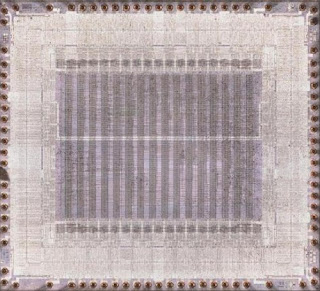 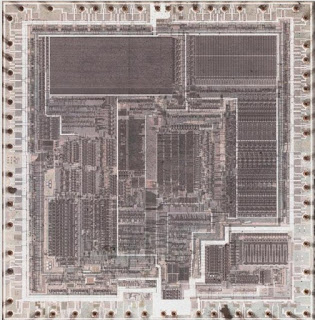 We then imaged the MCU ROM: 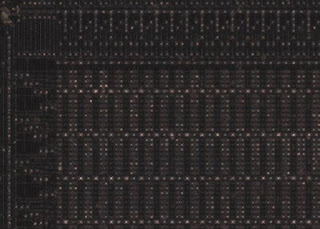 to allow analyzing the boot ROM firmware for test modes.

The primary aim of analyzing the boot ROM is to find test modes that allow reading out the EPROM. Such methods might include:
With that in mind, lets take a look.

Here is some early boot code:

We know that under normal circumstance (a game booting) it reaches this point and waits for "command 0x02" (run the EPROM code).

However, there are a couple of other options in this table: one to reset the MCU and another to jump to an internal sub-command handler. This sub-command handler is a sort of "test mode" for the MCU and offers several debug features.  The idea of the trojan was to exploit these commands by changing the initial value sent by the 68K from 0x02 to 0x03 and make use of a specific command that would copy the EPROM area of the ROM to RAM, as documented later.

We intended to exploit the EPROM unlock command, which expects you to feed a 128 byte key (magic word) in (with careful timing) at which point it will copy the content of the EPROM to the RAM. Details here:

The UP78C11 has two different outcomes from this function that the 68K should be able to see:
As the exact timing between the 68k and 78C11 is unknown, and the only result we can get from this command is "the number of correct values" that were passed, we have to try and brute force the timings needed.  Too slow or too fast will result in failure.

To do this we made a table on the 68K side containing a "delay" value for each of the 128 bytes that needed sending.

I sent each byte, waited the delay in my table, sent the next byte etc. (not caring if the UPD78C11 code was accepting or rejecting that specific byte).

At some point during this stream of bytes being sent the UPD78C11 would respond, giving us the position of the last byte that was actually successfully received by the internal code.

Once we had that response we could stop sending, because we knew the position last byte that had been successfully received.

With this knowledge the timing delay could be adjusted, and the whole process tried again until a timing window that worked for each byte was found.  Essentially we reduced the delay for that byte, then restarted the process.

By repeating this process until the timing was correct for each byte we were able to send the whole key, and, in MAME, using hacked up Volfied code managed to pass the key check and trigger the "copy to RAM" process, at which point the 68K was able to see whatever we’d put in the C-Chip EPROM area. 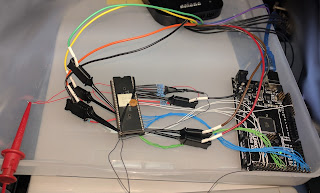 Above: early test rig before using a full PCB

The code in MAME was extensively tested and worked for a wide margin of timing videos, allowing for the 68K and UPD78C11 to be running up to 10x different speed than we were guessing.  It was robust, and SHOULD have worked on a PCB.

We are speculating that the following line is to blame:

This is called immediately after going into the sub-command handler.

At that point, the 68K no longer saw any of the status bytes in the 0x1401, 0x1403 comms ports, as if access to the ports had been blocked or remapped.  The UPD87C11 also no longer seemed to respond to commands written to these ports (such as the one to reset the MCU) suggesting that this ‘MVI PF, $C0’ was completely disabling the communication area between the CPUs.

We know the CPU entered the sub-command handler, because we know it was waiting for command 0x02 at the point where we sent command 0x03 on startup, meaning we knew exactly where it was in it’s internal code, but after that line is executed we no longer see any of the expected responses.

It’s possible it remaps it to somewhere else, but limited evidence meant we had no way of knowing this.

The only other place PF is written is early in startup, with another fairly odd piece of code.  From what we could tell PF goes to the ASIC so could be doing anything.

So while in theory, and in MAME the "read out EPROM" area brute force trojan worked by exploiting this internal test mode of the UPD78C11, on real hardware it absolutely did not, leaving us with little to go on.

We also considered a few other things like glitching or relatively small package modifications like taking control of a few bus lines.

One option is to directly read out the EPROM by rebonding it. Although this is a lot of work, it is relatively straightforward and will work if done correctly. Also getting a single full ROM extracted may ease boot ROM analysis by seeing how the game uses it. Finally getting a single game completed would be very valuable in the interest of progress.

We first came up with a plan how to cut it out of the package:

Then planned out a PCB to hold it: 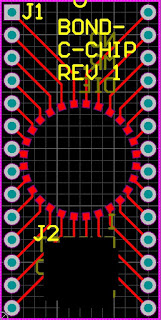 And modeled them together (scaled images) to make sure everything would reasonably fit together: 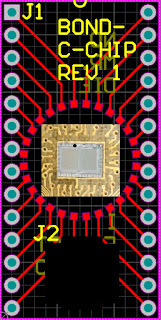 Note the actual board is cut out in the center and the chip rests on a carrier PCB below (shown later). This allows the bond wires to drop down straight onto the chip. Otherwise, if attached from the same plane, they would need to be formed to avoid hitting the edge of the die.

First, pins were removed from the package and it was backthinned to reveal the PCB:

Backthinning is required to keep a low profile on the lower mezzanine.

Anyway, cut to size, using the PCB traces / vias as a guide:

And then epoxied onto the bottom mezzanine: 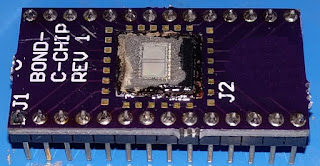 And then stacked into the full assembly: 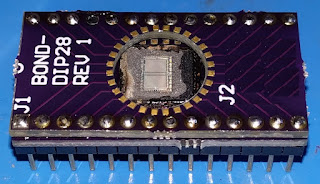 This was then bonded as done in previous posts: 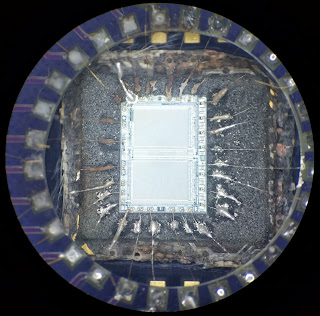 Finally, this was dropped into an EPROM reader. Unfortunately, the connections are flaky and we were only able to get half of the ROM (one address line not connected). The discolored connections above are from re-dissolving some of them with nitric acid to attempt rebonding flaky connections.

We are looking into a few options to proceed such as better understanding the ASIC. For example, there is at least one pin we don't understand well that could be required to activate the test mode. We may also re-capture the boot ROM to ensure we are analyzing the right code.

However, we are likely going to get access to a bonding machine in the near future. This will hopefully make rebonding the EPROM die relatively straightforward. Stay tuned for more info!

Enjoy this post? Please support us on Patreon! Note: with the Indiegogo campaign over we unfortunately don't currently have a way to accept one time donations.
Posted by CAPS0ff at 12:08 PM 3 comments: