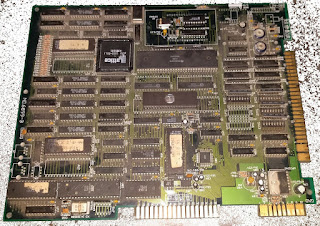 We have a number of inherited dumped AT89C51 chips in our inventory as well as a few new undumped ones:


AT89C51 is known to be vulnerable to voltage glitching. Basically there is a race condition when erasing where the security fuse is erased before the main data. If you pull power at just the right time, you clear protection without erasing the data.

However, we had a few concerns approaching this: 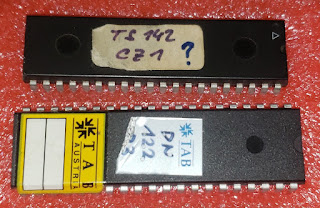 We started by analyzing the chip health to see if they had damaged EA or other issues. While we didn't detect any issues with EA, we did see some odd behavior on C056. When an AT89C51 is protected, the debug interface shuts down and results in the following observations:
C056 reported its memory as 0xFF, but the chip ID was reported correctly (0x1E51FF). This implies that the chip is not only unlocked, but its also erased! To confirm this, we did the following:
When tested on C056 programming did not fail and the first bit was cleared. Unfortunately this is pretty concrete evidence the chip is not protected, and is indeed blank.

Moving on, we still have two chips that we'd like to dump. After some discussion, we decided the best approach was to attempt glitching once. If it fails, fallback to microprobing. Originally we tried implementing the glitch ourselves, but got access to a RunFei commercial voltage glitcher and went with that instead. Unfortunately, C054 did not dump via glitching and will have to be microprobed. 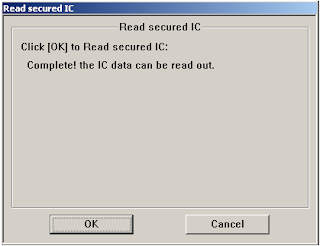 However, C017 succeeded! It's unfortunate we only got 1/3 dumped so far, but its still good progress that 2/3 of our AT89C51 inventory is processed. We are also investigating using the RunFei for related chips like AT89C2051.

Enjoy this post? Please support us on Patreon! Note: with the Indiegogo campaign over we unfortunately don't currently have a way to accept one time donations.
Posted by CAPS0ff at 8:31 AM