Side note: post was supposed to go out early release to backers but accidentally went to general release.  We apologize to the backers, but it got a lot of attention in the short time that it was out, so we think it is best at this point to just keep it out there.  We'll fix this for future posts.

First part is same idea as #45 but on a smaller scale: assess and repair damage.  Sample as received: 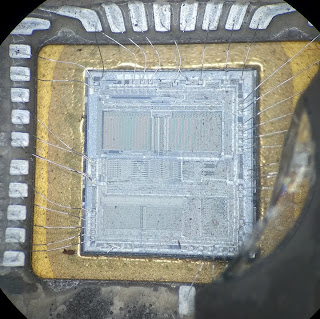 The chip has been opened and 5 pins are missing at the bottom.  Bond wires are in general disarray and the die is dirty: 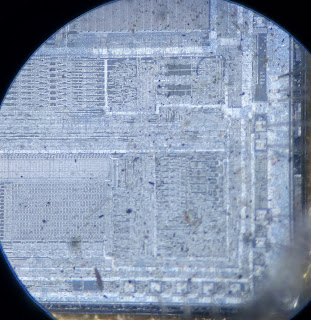 However, no obvious silicon damage.  After ultrasonic clean: 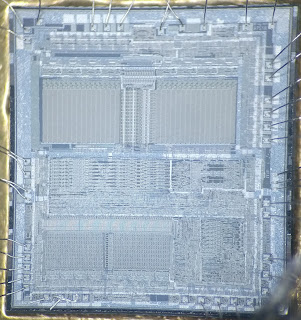 This allowed a closer inspection under a higher power microscope that also revealed no damage.

Among the 5 broken wires are 3 address bits, reset, and one from P3.  P3 is unused during readback, so we really only need to fix 4 of them. 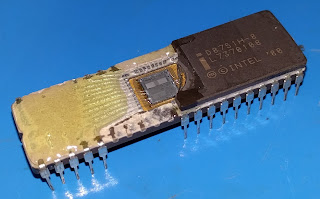 This helps prevents damage when inserting into a socket.  Next, inserted into a socket to improve mechanical stability and provide a template for the new pins: 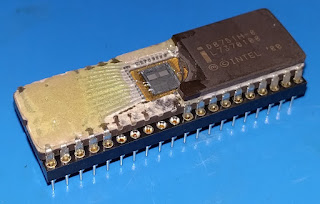 Then a sacrificial 8751 was stripped of its pins (see 45 post for process details) and epoxied into the leadframe: 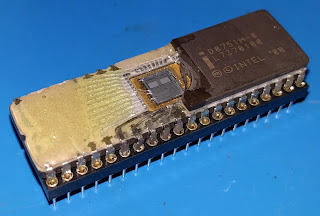 During wire attach, previous work put epoxy on the die surface to use as a fine palate.  Although this is likely harmless, can possibly scratch the die and/or short something out.  Decided to put the security fuse UV mask on early to double as a mask and a protective barrier: 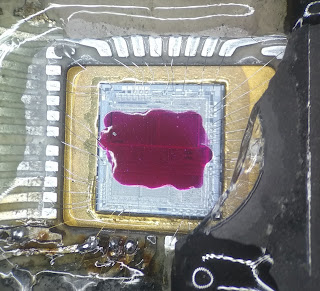 Wires are also soldered up now: 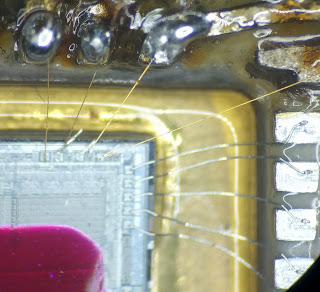 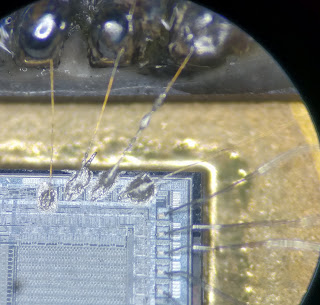 After cure tried dumping and still getting address failures with several bits stuck at 0.  Although pin resistance values are not in spec to other similar pins, they are close.  Suspect that epoxy got too close to die edge and is doing some sort of soft short. 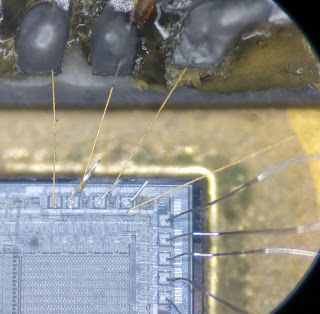 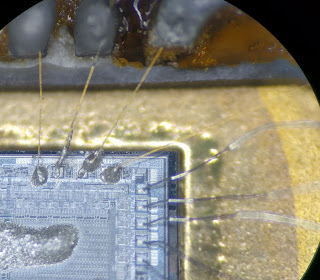 And address bits are now solid!

However, this whole time data bits have also been flaky.  At least one wire was broken and was repaired with silver conductive epoxy.  However, we are unable to determine why data lines are flaky.

Fortunately, dumps were taken at many steps of this process.  In fact, at least three dumps had all address bits correct but varying data bits bad.  Several of these dumped the same twice meaning the data is incomplete but reasonably stable.

Wrote a small bit of code to combine the good bits from each dump.  This also showed that dumps agree on bits common between them.

Next, popped combined dump into a disassembler to verify reasonable control flow.  Cursory check revealed no errors.  Finally, dump was simulated and showed no obvious issues.

In conclusion, 204 was salvageable but was a bit of a puzzle to piece together.  Several verification methods indicate its probably good.  Hopefully this is the last of the samples requiring such repairs.

Enjoy this post?  Please support us on Patreon or Indiegogo!
Posted by CAPS0ff at 12:06 PM